The final Classics Series concert of the season featured a world-premiere from acclaimed composer Keith Lay, a professor at Winter Park’s Full Sail University. Lay’s “Venus and Vulcan in America” received an enthusiastic reaction from the audience at the sold-out Bob Carr Theater.

The Philharmonic also was celebrating a new education initiative that gives music students the chance to learn from the orchestra’s musicians. Honored on Saturday was the Winter Park High School Park Philharmonic, named High School Orchestra of Distinction. A panel of judges selected the ensemble over applicants from Orange, Osceola and Seminole counties.

The Osceola County School for the Arts Symphony Orchestra was also recognized.

The students in the audience certainly received an education as the Philharmonic performed an exciting program that included not only the world premiere but an energetic reading of Wagner’s Overture to “Tannhauser” and the popular “Pictures at an Exhibition.” 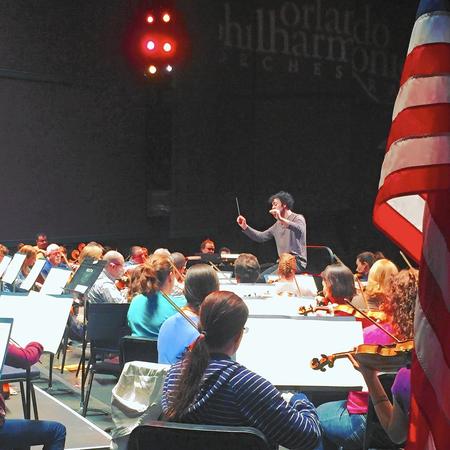 The orchestra, augmented in size, showed an exceptionally wide dynamic range — the forte moments were truly forte — but the musicians didn’t let volume override quality. The brass in the “Tannhauser” sounded excitingly bold without bleating.

Jacobsen smoothly led the orchestra through the changes in mood and irregular rhythms of “Pictures at an Exhibition.” Throughout the Ravel orchestration of Modest Mussorgsky’s most-famous work, the musicians easily moved from tenderness to thunder before the magnificent “Great Gate of Kiev” finale.

Introducing his composition, Lay described it as “a revenge of the nerds story with cosmic proportions.” Indeed, the work sounded appropriately epic for a tale of the overwrought Roman gods — violin strings shimmered while percussion beats sliced through the melodies like Vulcan’s great hammer in his forge.

Such was Jacobsen’s enthusiasm throughout the evening, at one point he leaped a good 6 inches off his conducting platform. Later, caught up in the moment, he nearly began Ravel’s “Alborada del gracioso” before all the musicians had taken their seats.

“That could have been bad,” he quipped.

But, like the evening’s other selections, the rhythmic “Alborada” delighted. It was a splendid concert to end a memorable season.

Next from the Philharmonic

• What: ‘The Magic Flute,’ Mozart’s opera