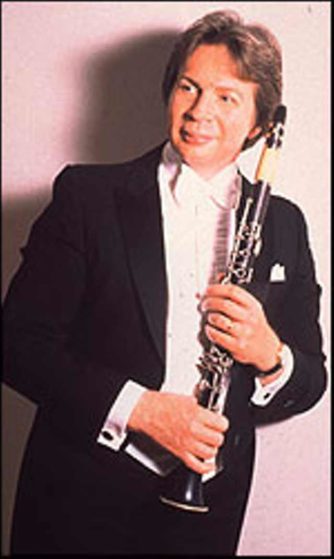 People write music for the clarinet because of its tonal qualities and a wide range of sonic possibilities that lead from deep, woody depths to light, feathery heights. It was the instrument of choice for such major jazz players as Sidney Bechet, Artie Shaw and Benny Goodman — folks whose fluid fingering and mellifluous way with the “licorice stick” influenced generations of musicians after them. Composers like Wolfgang Amadeus Mozart, Carl Maria von Weber and George Gershwin have all written major works that take advantage of the clarinet’s distinctive sound. Richard Stoltzman, the musician deemed by many critics to be the premier clarinetist in classical music today, is fully aware of the repertoire. He has performed all the classics for his instrument in concert halls around the world, but his recordings also showcase other, more wide-ranging interests. Stoltzman has recorded jazz tunes, Brazilian melodies, folk songs and gospel riffs, but he has also done a lot of work on the cutting edge of modern classical music and can be quite evangelical about it. Stoltzman appears with the Orlando Philharmonic Orchestra this weekend, playing the solo in Aaron Copland’s “Clarinet Concerto.” The piece was originally commissioned by Benny Goodman in 1947, and jazz elements are a big part of its charms. Stoltzman has played Copland’s opus many times, even recording a highly regarded version with the London Symphony Orchestra. He feels that “it is easy to identify with as an American clarinetist. You really feel that you’re playing music of your country. I’ve got a real empathy with it, and it’s a major clarinet work for the 20th century.” Modern music is something that Stoltzman feels passionately about. The clarinetist has always sought out ways to further challenge his abilities and expose music that otherwise might not receive a hearing. For example: Stoltzman was a member of the chamber group TASHI when they brought Olivier Messiaen’s great “Quartet for the End of Time” to the marketplace. And he premiered Toru Takemitsu’s “Fantasma Cantos for Clarinet and Orchestra.” Both composers were fairly well known, but Stoltzman is always on the lookout for compositions from lesser-known composers, too. He does a lot of work with the Master Musicians Collective (MMC), a nonprofit group dedicated to the dissemination of music that otherwise might never be available to the public. Stoltzman says MMC is founded on “a true premise: That there are an awful lot of worthy American composers who are not able to get their works heard and who spend, sometimes, their whole lives writing but never have their pieces recorded, certainly not by top-notch orchestras.” In many ways the MMC is carrying on the tradition established by the Louisville Orchestra in the ’60s and ’70s with their “First Edition” recordings of works by Otto Luening, Harold Shapero and Ernst Toch, among others. Stoltzman certainly remembers the impact those recordings had on him. “I was in `music` school but none of these composers were ever talked about or mentioned,” he recalls. “I went into the library and, wandering through these stacks of records, I found these Louisville recordings. `I was` just kind of curious. I opened them up and … ‘Oh, this is kind of interesting.’ Without those ways of documenting a composer’s work it’s really tough on the composer.” It was through the MMC that Stoltzman met Keith Lay. An Orlando-based composer, Lay had written a piece called “Caoine for Solo Clarinet and Orchestra” that the clarinetist was exposed to during his work with the MMC. “I thought the work was quite something,” Stoltzman said. “It is succinct and uses the clarinet in a very provocative way. I think it’s appropriate to the way the clarinet can sound. It’s got this wailing … ” “Caoine” (pronounced keen), which receives its world premiere Sunday, gets its name, says Stoltzman, “from a wail, a death wail in Irish lore.” The work lasts around eight minutes and was recorded by Stoltzman and the Warsaw Philharmonic under the MMC imprint.
Back to "Earth Caoine (Earth Cry)"
{{list.tracks[currentTrack].track_title}}
{{list.tracks[currentTrack].album_title}}
{{classes.skipBackward}}
{{classes.skipForward}}
{{this.mediaPlayer.getPlaybackRate()}}X
{{ currentTime }}
{{ totalTime }}