Keith Lay continues his ongoing experiments in psychoacoustics with his latest composition, Distance Music at Lake Eola for Walking Audience, Train Horns and Brass Choirs…. Those who witnessed Lay’s 2012 performance, inSPIRE, will be familiar with his penchant for adding time and space to the usual elements of a musical composition….it’s a certainty that this will be a fantastically brain-expanding experience.

The distance organ premiered in 2014 at the well attended “Distance Music at Lake Eola” for Seven Train Horns and Brass Choirs concert in downtown Orlando. Horns were donated by Nathan Manufacturing, powered by nitrogen (N2) gas through seven radio-controlled, solenoid-actuated poppet valves donated by Parker Hannifin’s Pneumatic Division. Funding came from an $8710 Kickstarter and grants of $2500 from the United Arts of Central Florida and $1000 from the Awesome Foundation. This video explains the design of this concert:

In the 22 acre Lake Eola, seven nitrogen powered train horns pitched C,Eb,F,Gb,Ab,Bb and D were each mounted upon a heavy, pedal-powered, 5 seat fiberglass boat shaped as a swan. They were “played” by on/off commands sent through radio signals broadcast from the shore which emanated from a Logic X sequence on a laptop computer. The homebuilt radio broadcaster and 7 receivers at the train horns used an Xbee-PRO DigiMesh 900 using the 902 to 928MHz (ISM) band. They transmitted data at 87kbps – basically offs and ons, to each horn receiver, which was was coded to respond by sending 12 volts to a coil opening a Parker Hannefin Pneumatics N-Poppet solenoid valve when it is addressed in the serial data. The voice communications between the composer, swan boat captains and conductors was provided by a Lectrosonics T4 rented from Tai Audio in Orlando. The conductors received their own, pre-calculated, separate, recorded audio click from the same LogicX sequence that controlled the train horn data. The north ensemble’s click was 0.985 seconds ahead of the south ensemble in the last movement to allow time for the sound to reach the south-shore audience in order to synchronize with the south choir’s beat.

I deliberately composed the accompaniment music for “Distance Music at Lake Eola” to be as mainstream and easy-to-understand-as-possible in order that the real focus be on Distance Organ timing and sounds. The music that came  from my 28 brass and percussionists provided harmonic direction, phrase and melodic interaction, organized into three movements: 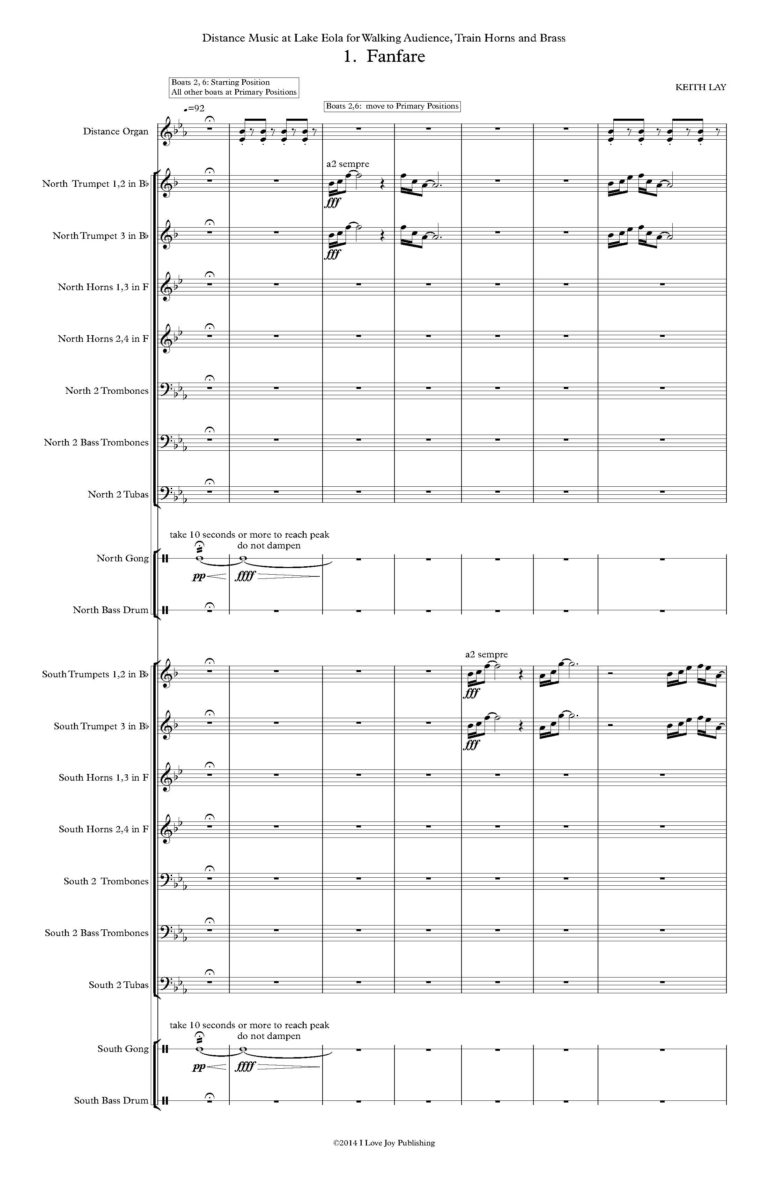 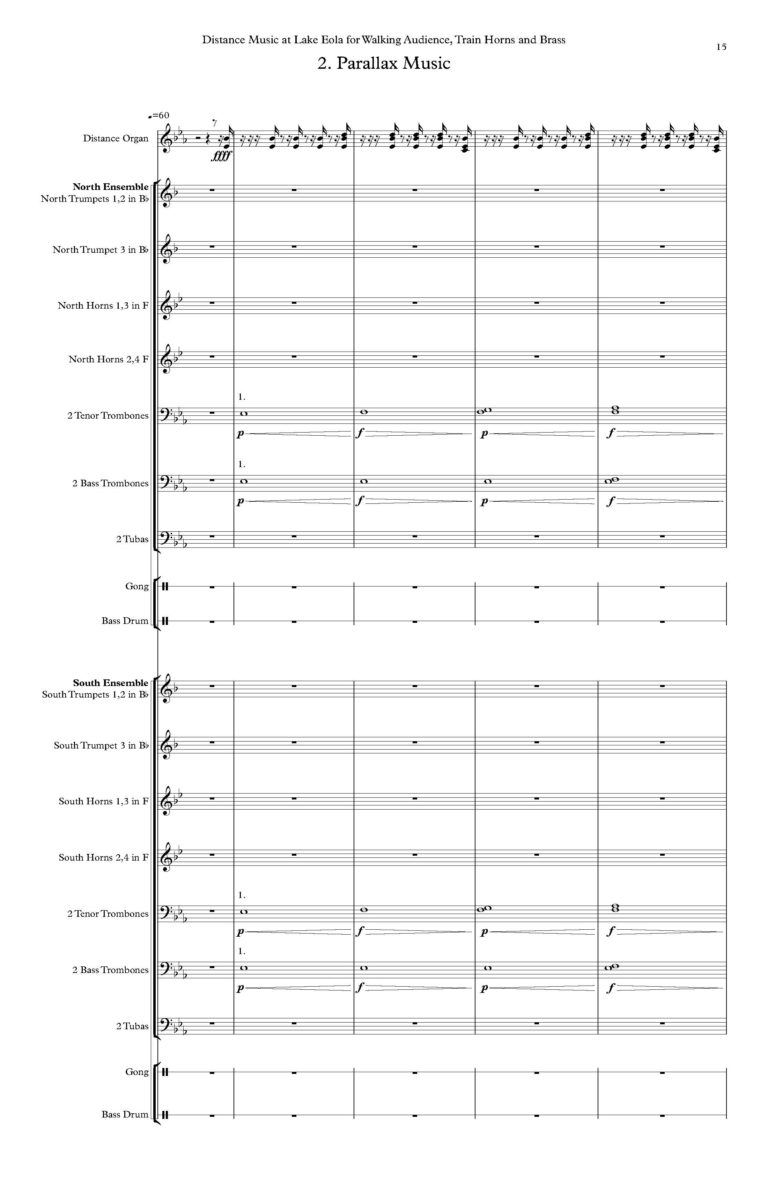 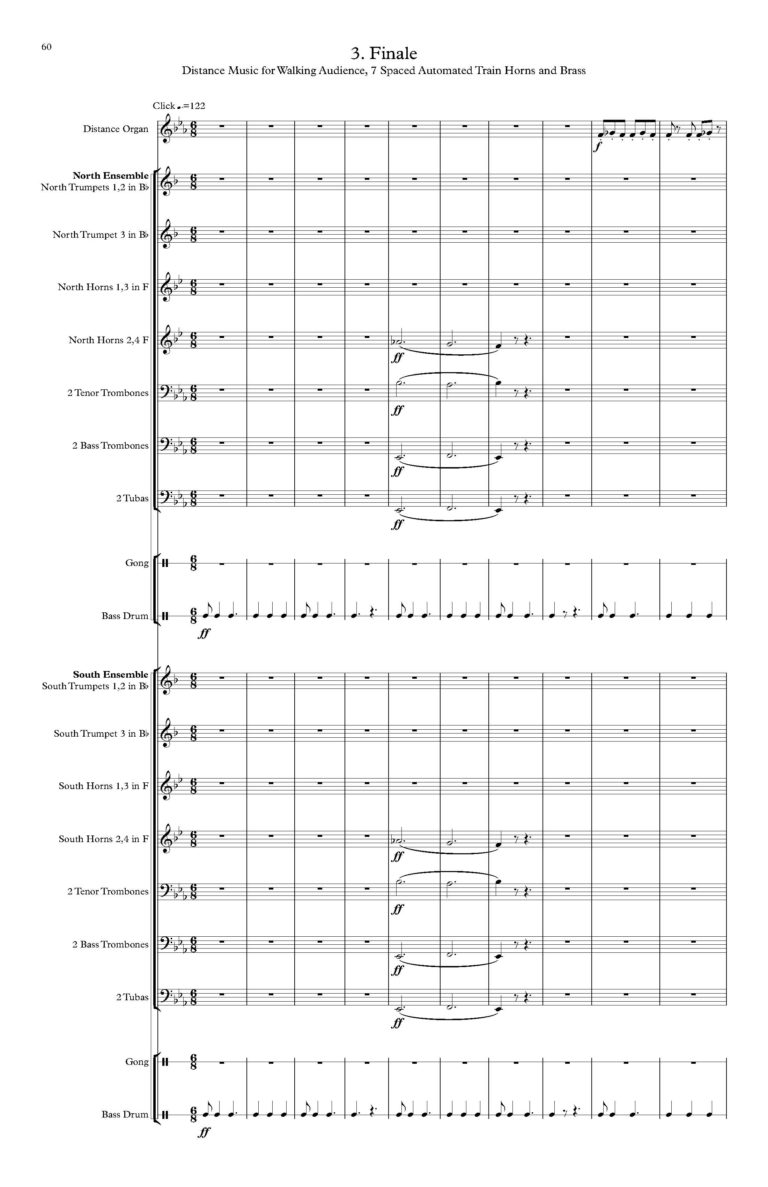 Originally composed for the two trumpet sections to play from atop nearby buildings, this movement was designed to 1. properly introduce the beginning of the event in a jubilant, general-audience manner and 2. “teach/introduce” the concept of Distance Music through a demonstration within the music.

A shared, constant quarter note repeating an open Perfect 5th interval from two train horns located side by side in the middle of the lake open the piece. The surrounding brass groups develop the idea of the perfect 5th into an antiphonal fanfare during which the swan boats move apart, continuing to play on the beat. From the audience’s perspective, the open 5th dyad from the boats will gradually split into two separated notes outlining the interval; the farther apart the boats become, the more time develops between the two notes. This experience teaches the watching and listening audience the scientific principle primary to Distance Music: that sounds coming from more distant sources take longer to arrive.

By the end of the Fanfare, boats reach their primary positions at the end of the fanfare, all seven of which are spaced on the intersects of three sets of virtual concentric circles. The largest set of circles are spaced at intervals of 141ft  from east to west that begin and end with a point near the walking path. Two other radii are centered near the walking path. All four of these points are identified with large signs.

The second movement was to be the “real” Distance Music composition oeuvre,  with all seven horns playing passages consisting of tutti, simultaneous, staccato toots from this primary boat position geometry. Resultant melodies would coalesce into rhythmically unique metric statements at every point on the audience path around Lake Eola; and coalescing into metrically coherent music at the four signed locations. With every step the walking audience takes, the distances between their ears and each horn would change thus resulting in a similar variation in timing due to the constant speed of sound. All seven horns would be heard, but in a different order and timing sequence at every point. The audience could explore the spatial musical fabric by moving backwards, forwards or side to side. Signed positions will manifest into a series of seven syncopated 16th notes at 120bpm (common time), since 141 feet intervals will result a 125ms period.  The melodies, comparing the result from West One to East One would be in exact retrograde of each other, simultaneously. Shore locations at the radii of horn-placement circles would result in a chord. Throughout the movement, the brass provide an accompaniment with changing harmonies and traded melodic fragments.

One of the most interesting experiences will be listening to the music slowly evolve when moving away from or towards a metrically organized (signed) location. Distance music is audible geometry! A sonic sculpture!

These Logic Mockups use actual horn samples in calculated order at 68˙F  from correct direction and amplitude with sequenced brass for each location point:

2. Parallax Music heard from WEST ONE

2. Parallax Music heard from EAST ONE

The last movement was composed to ‘show off’ the virtuosity of the Distance Organ in regards to speed. All boats navigated to a new position at a point late in the previous movement, to line up, facing their horns to the southern shore (where most of the audience was supposed to be) from a north central spot on the lake. In this position, the instrument would behave in a traditional mode since all boats were close enough not to create timing differences between them when playing together.  The movement was scored to create a ‘wow’ factor with a fast 6/8 lope and a train horn melody that would be nearly impossible to play by a human being – but possible with the technology and machinery on the lake.

What went wrong at the Lake Eola Premiere?

The Distance Organ pneumatics/mechanicals were successfully tested for one year previous, one radio one month previous, and the remaining seven radios built 3 days prior to the concert. All seven horn apparatus were finally built just hours before the premiere. We ran out of teflon tape halfway through the builds and slow leaking took place. Once arrived, unloaded and moved to the pier, we noticed important wire-to-wire points were forgotten in the complicated build order. The X-Bee radios were originallypromised to have up to 2 miles line-of-sight range. That range was later advertised as 1200 ft. The radios were tuned with A440 = midi note 60 (Yamaha system) but the Logic sequence was using the Roland system. The radios had terrible lag time because they were using a heavy MESH data protocol. The combination of these problems ruined the premiere.

The “Swan Boat Navy” of seven boats and the crew of 14 efficiently navigated their horn apparatuses to predetermined and rehearsed GPS points.  Thirty orchestral musicians showed up in a predetermined parking lot to be shuttled to the nearest location possible at the site, transportation made possible by Full Sail University and were in their seats, music and conductors at the ready, on time. But the principal actor to create the new musical form, the distance organ itself, failed to respond to 90% of the data sent.