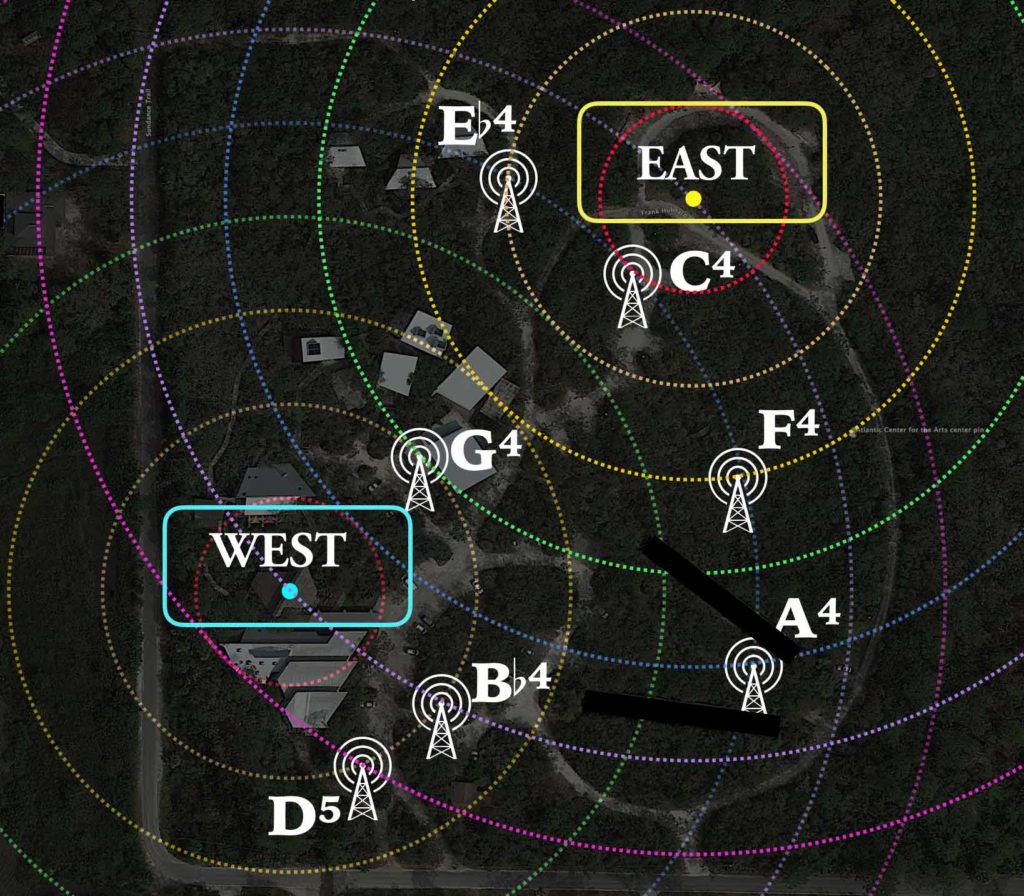 7 horn version of Distance Music @ Atlantic Center for the Arts

How to Compose Distance Music

A distance music composition begins with defining the audience-walking area(s) within the concert location. The placement of horns is critical to the musical experience, but the shape and contents of the audience area is more critical because it defines the social experience. Distance Music occupies the public space of its residents and visitors, and important landmarks can be used as sonic waypoints which serves two purposes: 1) the audience knows the direction that they’re going, and 2) focusing on those landmarks pays respect to the city, town, or parks’ unique features. The shape of the audience area can widely vary. For example, in Distance Music at Lake Eola, the 0.9-mile walking path circled the Distance Organ which was mounted on boats in the lake. At Distance Music at Atlantic Center for the Arts, the audience and the Distance Organ share the same 11 acre forest space (except for the high-SPL safety zones around each apparatus). With inSPIRE, the audience zone was a square of pavement around which musicians were situated around them in 12 positions as far as 1200 feet distant.

Sound moves faster in warmer air, regardless of atmospheric pressure and a fraction more so in very humid air. For example, at 75˚F, sound will travel 141.75 ft. in an 1/8th second. At 95˚ F, that sound moves 2.75 ft. further in the same amount of time. Compounded over thousands of feet, a temperature shift of more than a few degrees could drastically change sound-arrival synchronization, threatening the presentation of the concert. In effect, colder temperatures than planned shrink the size of a design.  From the outset of composition, research into the concert site’s average temperature will help the composer to decide the best tempo and beat division. 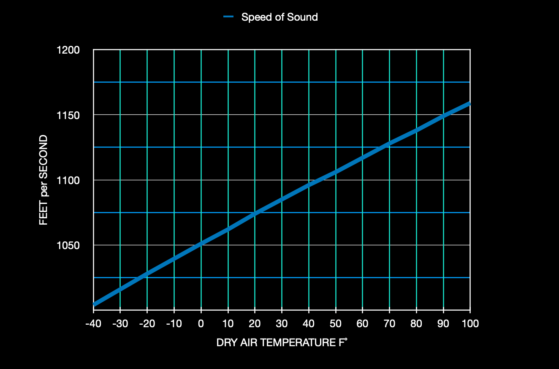 Composing Distance Music is a combination of geometric placement, harmonic taste, and choosing how the musicians will interact with the shifting ground patterns. Using Google Earth, measurements between all possible train horn placements and the prominent architectural features within the audience area are made with the goal of finding a single, least common denominator measurement between them all at a reasonable range of air temperature. This distance measurement is the “primary interval” and it is both an interval of distance as well as an interval of time. Next, the composer determines how much time sound will take to move from each horn to each PIP. This is accomplished by estimating the temperature of the concert atmosphere and using a formula to calculate.

C=the speed of sound in meters/sec. U =temperature in Centigrade

Once the speed of sound is known, the amount of time required to travel the distance of the primary interval becomes the predominant rhythmic subdivision of the piece. The subdivision can be embodied in any graphic duration value.

To create specific melodies to appear at a specific location, the composer first imagines the melody and calculates the time (in milliseconds) that each note is heard. Then, the horns playing each of those pitches must be each placed at a distance from that location so their sound will arrive at the correct time, and that the duration of each is the correct length. For example, at 80.5˚F where the speed of sound is 1140 ft/sec, if three staccato notes need to be heard one second apart, each with a note length of 100ms, the first horn can be any safe distance away, x; then the second horn needs to be x+1140ft distant, the third x+1140+1140 (2280 ft.). When all three horns play their short 100ms note, the intended three-note melody will be heard at that spot. But, nowhere else will that melody be formed.

Most of the listening area will manifest the constellation of horn pitch arrivals in arhythmic chaos. Regular meter will only exist in locations by design. As listeners walk through the continuum they will discern within the shifting of pitch order a constant construction and deconstruction of ordered elements. Therefore, as many metrically regular areas with a discernable beat should be created as possible. If points of metric coherence are not created, then audiences will be unable to comprehend the melodic changes when they walk, and the time-space continuum will not be revealed to them. As listeners near a metric point, the pattern moves from chaos to order. These points of metric stability should reside, as often as possible, at known landmarks in the audience area so that the audience will know where to find them.

A beat can be created in the shifting ground by placing all of the horns in multiples of the primary interval. Such points are called a “PIP”, or “Primary Interval Point“. Distance Music at ACA has two PIPs. Lake Eola has four.

Since timing is created by distance, placing a horn anywhere on a radius will provide the same timing result. In this example, a listener at the center point (PIP) will hear the sound coming from the horn after the same amount of time, regardless of the horn’s position on the circle. This is because every point on the circle is the same distance from its center. 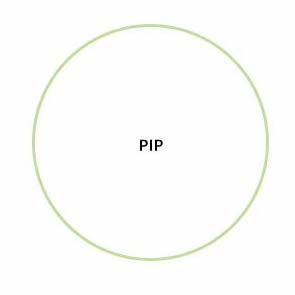 A rhythm of four evenly spaced notes will result from sound sources being placed anywhere on each of four, evenly-placed, concentric circles. 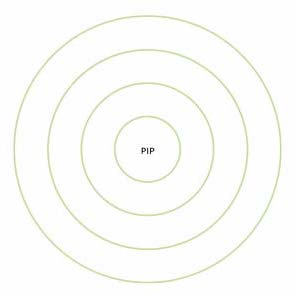 If the notes in the above example are C,D,E and F, from the closest ring to the furthest, a melody will result if the listener is standing at the PIP 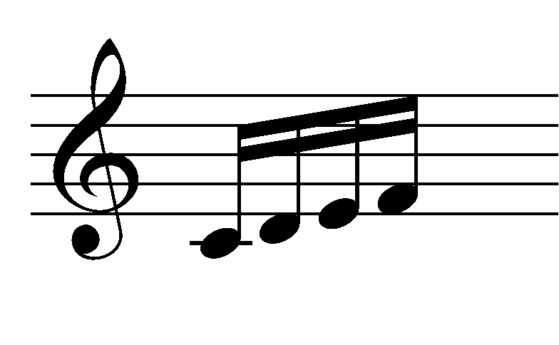 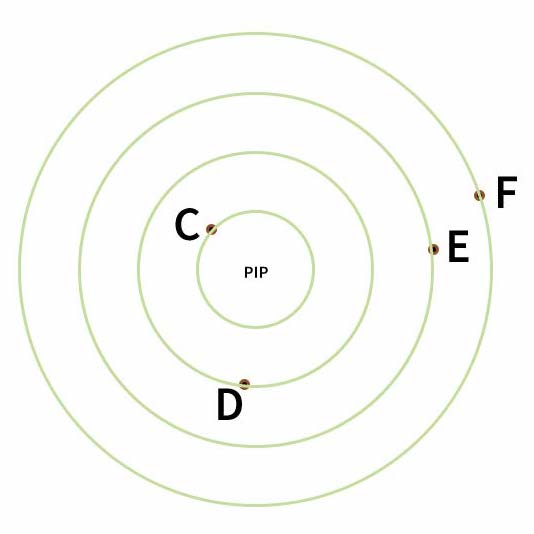 To create two PIPs, the simplest solution is to use two sets of concentric circles and place horns on their intersection points. In this scenario, audiences at both PIPs hear the same series of sounds at the same time, but in inverse order. 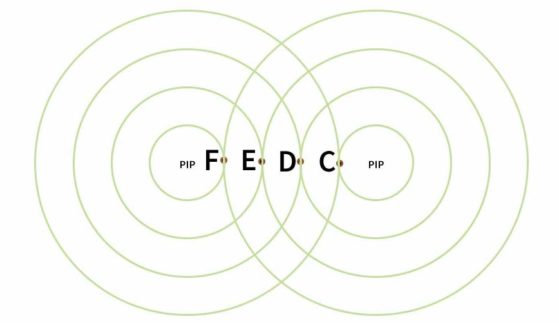 the Right PIP after a 16th rest

the Left PIP after a 16th rest

Points shared by the two sets of circles, i.e. intersection points, provide the available options in multiple PIP designs. In this example are three equidistant PIPs. When all four horns play at the same time, each PIP gets a different musical result. 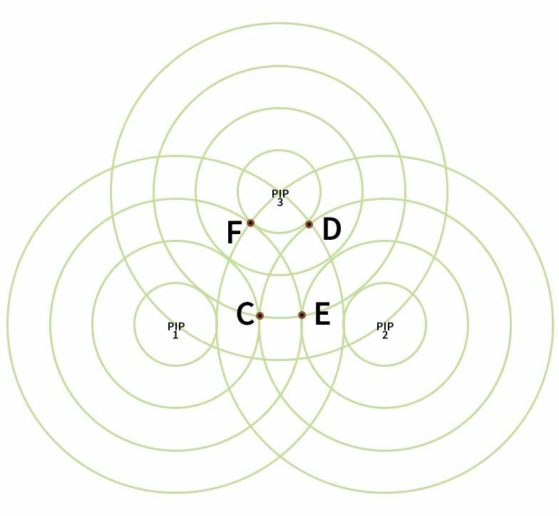 Here, again, PIPs 1 and 2 are inversions of each other. Sound from horns that are equidistant to the listening point will arrive at the same time.

At each staccato sounding of the horns, a kind of sonic sculpture would inhabit the concert site’s atmosphere because the shifting ground music would be “attached” to the actual walking ground. Audiences explore the sonic structure by moving, listening to the gradual permutations in the musical pattern. The melody pattern freezes when they stop moving. Those wishing to re-experience a favorite shifting ground melody can do so by revisiting that location. The acoustic time-space continuum relationship, which has been around us our entire lives, is revealed, as long as the horns continue to repeat the same initial playback sequence.

This recurring series of incessantly repeating notes could become irritating if it was the only feature of a Distance Music event. Here are some reasons this will not be the case: