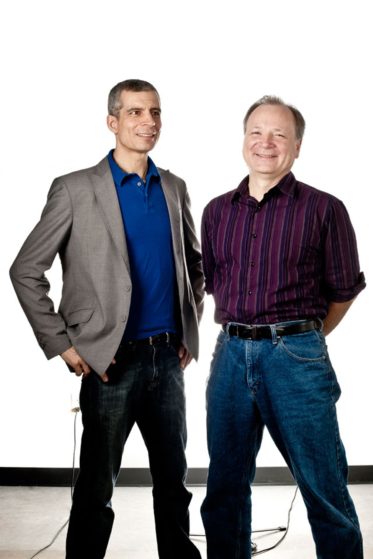 If you’re downtown at noon on Oct. 20, you might think for a moment you’re hallucinating when you hear the music. Bells and carillons, trumpets and other brass instruments will echo along Orange Avenue, as if from on high. You’re not losing it, and there will be no seraphs or cherubs – just local composer Keith Lay and his squad of musicians, perched atop the buildings of downtown Orlando. The musicians will call and respond from locations around the city, like birds chirping to one another, to create a unique, spontaneous musical experience for passers-by. Lay says the performance will be audible from virtually anywhere downtown, and it will challenge the way listeners – himself included – perceive sounds. “If it’s a symphonic piece, you want it to act as a whole organism, and you’re not planning on people being late,” says Lay, who has been composing music in Orlando for more than two decades and teaching at Full Sail University since 1990. “You need it to be an organism that speaks as a unit, right? So this piece gets to explore a whole other dimension, which you usually don’t get in music, and I love that.” Lay is putting on this lofty performance, called inSPIRE, as part of a larger initiative called the Creative City Project. Local writer-artist Cole NeSmith and Orange County Arts and Cultural Affairs director Terry Olson worked together to make the project, which coordinates flash-mob-style street performances that illuminate the city’s vibrant cultural scene, a reality. “We were at a mutual meeting, and the idea of doing more stuff in public spaces came up,” NeSmith says. “So I said, ‘Well, I have this idea.’ So after that, Terry and I sat down and talked, and I kind of pitched him the idea.” The two coordinated the Creative City Project to coincide with National Arts and Humanities Month. Acts as behemoth as Cirque du Soleil and as homespun as local singer-songwriters will occupy downtown’s plazas and street corners to create “positive shared experiences” for city residents. A different act is scheduled for every day of the month. For NeSmith and Olson, the project is about shedding light on nooks and crannies of Orlando’s art world that some residents might have missed. Given the transient nature of this city, there are plenty of residents who may not yet even be aware of the depth and breadth of the local arts community. “When I came here [30 years ago], Orange Avenue was tumbleweeds,” Olson says, “and the arts were all in an institution – the Civic Theatre, the opera, the ballet. I had season tickets to everything in town, including the colleges, which was easy to do. There’s no way I could do that now.” NeSmith says that artists should have “an opportunity to shape culture,” and exposing people to art in unlikely places gives them an opportunity to influence the fabric of downtown Orlando. “Really believing that giving artists a platform to perform or create in a public space helps people encounter a positive shared experience in a place,” he says. “I think by creating these positive shared experiences, through art and creativity in the area, it helps shape the ethos of our city.” The Creative City Project draws on all manner of art forms, some familiar and traditional, others edgier and more subcultural. For instance, on Oct. 6, local steam-punk circus Phantasmagoria III will perform at the corner of Central Boulevard and Magnolia Avenue. The project will host a spoken-word night at the corner of Orange Avenue and Pine Street on Oct. 10. And at noon on Oct. 12, the ensemble cast of Orlando Ballet’s 2012 season premiere, Vampire’s Ball, will be performing the show’s finale – a dance set to Michael Jackson’s “Thriller” – outside the Plaza Cinema theater. It’s an ambitious endeavor, but NeSmith and Olson say they’d eventually like to take it to the next level by making it a year-round project. “Why not be audacious and eventually have something every day?” Olson asks. “This is a creative place, we have 55 million people visit here every year, we have world-class entertainment artists – thousands of them – and what if we encouraged every artist to give one day a year to doing something in the public space? We could fill up a year.” For now, we can look forward to 28 days of free pop-up art all around town.