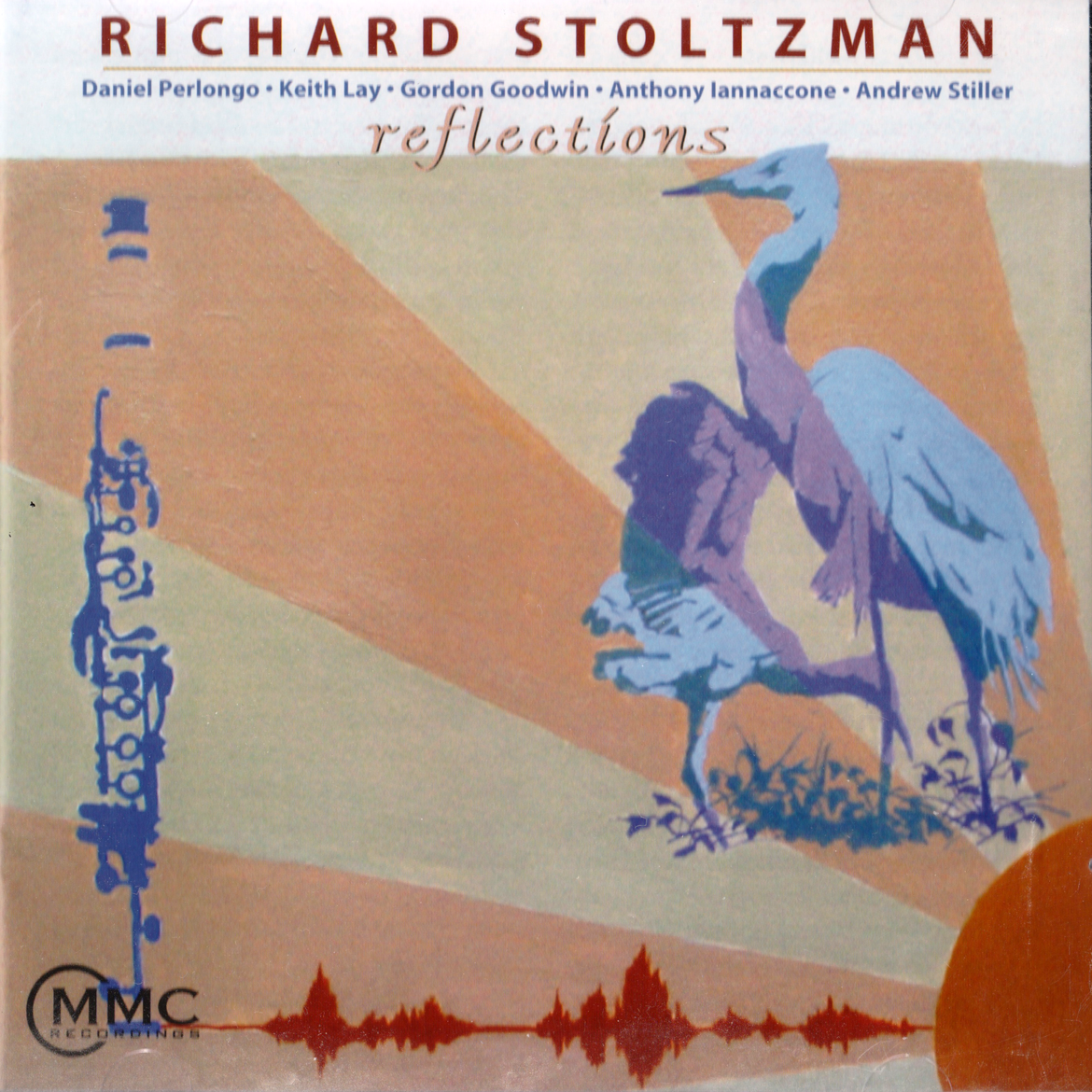 Thanks to Richard Stoltzman and William Thomas McKinley, the recording of “Earth Caoine” put me on the map as a serious composer in the US. I am greatly indebted to Mr. Stoltzman’s artistry and Tom’s openness to emerging composers. 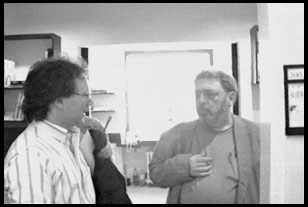 The great American composer and founder MMC Records, Wm Thom McKinley and I

I received a call in 1993 from composer Thomas McKinley. He was enthusiastic about his unique model of a record label designed for the contemporary composer. It was called MMC, Master Musician’s Collective. He suggested that I write a work for clarinet and orchestra for his friend, Richard Stoltzman.

I already knew this marvelous clarinetist’s recordings very well! Kevin and I had all of his releases, both as a soloist and with KASHI. How exciting! If the piece was up to the label’s standards, I’d have an opportunity to record it with Stoltzman in Warsaw in 1995.

My original version was titled “Falling Rain”. It was inspired by a dream described by my twin brother, Kevin, about falling through the night sky.  As I worked with the falling idea, I imagined being a raindrop: long falling into its lover, the Earth: content, and transforming with purpose. And, as I considered the sound-gesture of the falling, I could not help but hear the high, falling sound more like a cry. This gut-understanding of what that sound meant led me into an evolved concept of the music: a lover’s cry over a corpse. An angel in space looking down at a dead earth, wailing over the loss of its infinite beauties – including all of Mankind’s love, growth, and achievements. The warning of the super-tragedy of a dead Earth – a concept that was not popularly considered in the mid-90s, needed to be voiced.

“Caoine” [pron. “KEEN”] is a funeral rite of wailing over a corpse. The spelling is from its Irish and Egyptian sources.  Caoining gave those communities a public opportunity to cry – very missing our modern culture. “Earth Caoine” became alive with soul and purpose it had not previously had. Before I turned in the work, Dr. Keith Koons, Professor of Clarinet at the University of Central Florida, generously mentored me on the playability of the extreme register glissandi.

The recording cost me $9000 – a third of my yearly salary. Adding to that financial stress and the risk of this venture becoming a foolish vanity project, I was scheduled to leave when my youngest son Brendon was only a few months old. Understanding my financial stress, MMC kindly offered me a gig as their recording engineer for their Broyhill Quartet sessions, which I took. I believed in my love of music and sound – and with my amazing wife, Joy’s, support moved forward with the project. 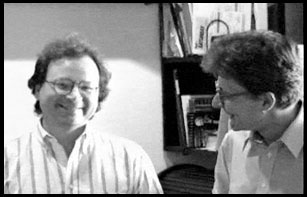 Conductor Jerzy Swoboda and I discuss the score

In the summer of 1996, I traveled to Warsaw, Poland to oversee my recording session with MMC. I was accompanied by three of my five brothers Kevin (who paid for my trip!), Randy, and Rob. We landed in Warsaw and stayed at their Holiday Inn for 3 nights. The sessions were held in the marvelous Philharmonia Hall in the city’s heart. The superb orchestra did a quick read-through at the end of the long first day of sessions without Mr. Stoltzman. It was a disaster. The music without the solo clarinet confused the orchestra, producers, and conductor. As the musicians packed up, I overheard the producers complaining to Tom McKinley: “what an awful work!, why are you wasting the time of this great orchestra with this?”. That first night was a dark one for me: I questioned abilities as a composer, this was only my second orchestral composition ever performed.

Producers Andrzej Sasin, Andrej Lupa, Gordon Goodwin and I in the control room

The next morning, Richard (Dick) and I met before the scheduled session. He asked me what I meant with the glissandi, mentioning that they are used as musical jokes in vaudeville clarinet arrangements. I told him about my vision of the angel crying over the Earth. In my following recording session, he rendered the difficult high glissandi with so much beauty and intensity that the musicians sat up in their chairs, amazed, inpsired, and a silent electricity filled the air after the first reading. The composition now made sense and  came together. They even applauded Richard at the end of the session. After that day, Tom considered it in the can, but I felt I was not given the proper amount of time, compared to the other composers. I appealed to Richard, and he agreed that it needed more time. And though Tom had the next half-day devoted to his Clarinet Concerto, he went ahead and gave me more time. Thank you Tom, for your sacrifice. It meant the world to me. Dick’s performance is a very precious gift to me and remains my best recording. At the end of my session, I met the wonderful anime composer, Yoko Kanno, who was early for the next session. She expressed to me how much my piece moved her. Only decades later, did I realize who she was and the importance of her work.

After the recording sessions in Warsaw, we ventured by train to Krakow to experience old Europe at its best. We also wanted to check out the last remaining PZL P-11c gull-wing fighter while we were there. A simply fantastic trip.

I was 38 at the time, and I have always felt that the recording should have had a tremendous impact on my career, but, year after year the recording was not released by the MMC label. It was finally released in 2005 when I was 47. The record, called “Reflections” received rave reviews from Gramophone Magazine, The Clarinet, Archiv Music and The Buffalo News. Unfortunately, MMC was under financial duress and shutting down. After excellent reviews, the recording disappeared. The few months the recording was out was not long enough for me to receive the impact I hoped for.

In 1999, the Orlando Philharmonic Orchestra premiered the work under the baton of music director Hal France. Hal and the orchestra were kind and generous to me. Our orchestra was young in those days, being created by musicians from a previous, longstanding Orlando orchestra that disbanded after a strike, and I believe Richard discounted his normal fee to appear. Mr. Stoltzman’s support has been tremendous and means a great deal to me. For that concert, I made a few changes to the composition, calling this version simply “Caoine”. After it all, I regret making those changes – this original version is the right one.