The Story of “Children On The Playground”

Early in 1999, I received a surprise call from Alex Dean, an old college buddy violinist, and he was looking for something interesting to do while his organization, the United States Air Force String Orchestra, was performing concerts in Melbourne, Florida. Both my wife and I had great times with Alex in our University of Akron days, and we were pleased to invite him our way. During one of these visits, he dazzled our whole family with an impromptu performance. It was the first time the kids had ever heard real violin up close. Alex was fantastic with our kids, who were then small children, joking and having fun, even allowing them to hold and bow the instrument. Their eyes were wide with wonder. I played him the recording of “Caoine”, after which he asked me to compose a work for him to play with his orchestra. “Children On the Playground” was my attempt to capture the playful world of young children – so alive in Alex’s own musical energy.

In 1999 my children were 9, 7 and 3 and were full of energy and surprises. We were living in the fixer-upper house on Palmetto Street, where Joy and I have stayed, now fixer-upped. I was busy with Full Sail, on my 8th year as Course Director of Popular Music History, and had won my first grant with the American Music Center: a Margaret Joy Copy grant of a few hundred dollars for this work. 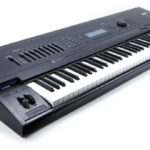 Then in the middle bedroom, “Children On the Playground”  was composed directly in Finale, speaking through an 88-key Kurzweil 2500 that the school had loaned several of us – state-of-the-art for the day. My studio in those days was stereo, using an AudioMediaIII card from DigiDesign through a consumer receiver to two Magneplanar SMG speakers that Ken Goldstone, now Full Sail’s COO, gave me.

1999 was the year that I found my groove in composing time, waking up at 5:30am before the kids woke. Once the kids were up, there would be simply no opportunities to write. Those years were a joyous time for me because my creativity flowed, my work at school was good and challenging, and my family life was wonderful.

“Joyful Play” came first. Inspired by my oldest, Christopher and daughter, Emily.. Like me as a child, Chris’ imagination soared away from this world and into grand stories and fantasies. Emily was a down-to-earth, pushy young lady – whereas Chris was fine with being pushed around. The combination of the two personalities inspired the character of the solo violinist.

The music of “Yearning” was based upon a 4 part vocal ear-training piece I created in 1983. To create it, I utilized my access to the Electronic Music Studios at the University of Akron College of Music, where I was teaching as an undergrad. It was inspired by a page of a Richard Brautigan. I’d simply closed my eyes and selected a page and wrote to those words. I don’t recall the book title, but it was page 47. I called it “Winter of Our Discontent”, which is also the name of a string quintet from around that time, but, maybe it was the title of the book, or poem, or sub-section of the Brautigan. I’d always loved the opening harmonies, and wanted to develop the music further. (it’s obvious I’m not a trained singer – and remember 1983 is long before DAWs and tuning technology!)

“Follow the Leader” was the last of the three to be finished, and did not flow as easily as the other two. The first ending was anti-climactic, which was changed for the 2010 concerts. The opening of thies movement  has never satisfied me because it can 1) do a better job playfully introducing the ‘taunt’. I’d like to include some improvisation and mock laughter from the violin soloist next time this is played, perhaps. I first heard an example of a close stretto of melody from the vocal group Anúna.

The work was completed in 2001. Unfortunately, changes in the USAF Orchestra conducting staff delayed the work’s performance. In the meantime, I entered the piece in the Sixth Riverside Symphony International Composition Contest.

2002 proved to be a good year for this work. First, the USAF String orchestra scheduled its world premiere, at Shenandoah University in Winchester, Virginia on August 28. I was invited to stay with Alex’s family and attend rehearsals. The USAF is an excellent orchestra, perhaps because of the significant number of hours these excellent musicians actually play together. Their ensemble is exceptionally tight and balanced. Difficult passages in the first and third movements were met with clarity and precision. Alex’s virtuosic performance was full of the energy of a musical Peter Pan. The concert was well attended and warmly received – and programmed many times on the Shenandoah Cable System, an excerpt of the program presented here:

Meanwhile, “On the Playground” won the Riverside contest along with five other composers! I would receive a thirty-minute reading session by the orchestra in New York that fall with the orchestra’s concertmaster, Cenovia Cummins, as soloist. I traveled to New York with my twin brother Kevin for a September 10 performance. The Riverside Symphony is a wonderful organization and could only exist in NYC: a part-time orchestra made up of great professional players. These musicians seemed to love and respect each other – I saw laughter and smiles in their intense work for these readings – the best example of what the word ‘philharmonic’ actually means: love-harmony. This idyllic and passionate atmosphere can be attributed to their conductor, George Rothman, and their composer-in-residence and artistic director, Anthony Korf. The musical styles read in these sessions were widely varied – from John C. Ross’ gorgeous impressionistic “After A Line By Theodore Roethke” to the austere and profound sonic adventures of Swiss composer Martin Derungs’ “Concertino”. Exceedingly demanding, indeed, for any orchestra. The last of the readings was my concerto. Cenovia Cummins, a stunning woman, beloved by her orchestra, stood and brought the work to life with a light-touched vivacity. She sang and glided through the entire reading. I learned at the session that there was a chance that one of our works read that day might be later chosen as a work for a Lincoln Center concert.

The Grand Prize, Lincoln Center, and a Times Rave Review

Two years later, Anthony Korf called me to give me that heart’s hope: They chose my work from a select pool of twenty winning entries culled from a field of five hundred submissions to seven competitions over the past eleven years! “On the Playground” would be performed at Riverside’s opening concert for the 2004-5 season at Lincoln Center! Anthony said he regarded my work as excellent and well-crafted. Such a statement from a composer of his stature was one of the highest compliments I have ever received.

Nell Thompson, the Director of Education at Full Sail, supported me with a paid trip to NYC. (Thank you again, Full Sail, for your constant support) Joy, and our son Chris, then 14, joined me, and had a fantastic adventure – it was Chris and Joy’s first experience in the Big Apple. Many members of our family and friends made the trip – what fun!

The work was programmed after the charming “Three Pieces” by the Erwin Shulhoff. Intermission followed, and the evening tied together with Dvorak’s popular Serenade in E major. I was invited to provide the following text about the work for the program:

The rave review by Antonio Tomassini, head critic of the NY Times, and the win of a major international composition contest gave me more credibility than ever. This led to, among other things, a commission by the Winter Park Bach Festival and Chorus (“Vision Of The Earth”) and, later, a performance by the Orlando Philharmonic.

Music Director Christopher Wilkins wanted to program the concerto for three consecutive concerts in February of their 2009-2010 season. The first in an excellent acoustic space of the Celebration Community Presyterian Church on February 13th. The second, an outdoor concert for Arts Fest 2010 in Avalon Park, and the third and final concert as a part of the orchestra’s Focus Concert series for small orchestra and chamber music. Christopher made a suggestion that I help out with rehearsal costs to ensure my piece came off as well as it could. The high quality of these performances could not have been managed without the ample time devoted in rehearsal, which was made possible by the support Ed Haddock, a co-owner of Full Sail University.

I recorded two of three of these performances in surround with the invaluable help of engineers Paul Harlyn and Brian Smithers. We employed Keith Andrews’ Soundfield SPS422B (thank you!), a pair of extremely wide-spaced AKG 451s and a pair of AT4051s on our soloists, Tamas, in an x/y configuration. The videos were shot with a single camera by the inimitable Lisa Mills, Director of the Film program at the University of Central Florida. Thank you all for your kind generosity.