For its annual fundraising gala, the Orlando Philharmonic Orchestra partnered with Full Sail University to create a concert showcasing not only the Phil’s musicians but the technological know-how of Full Sail’s students.

Titled “Symphony in HD,” the gala took place Saturday at Full Sail Live, the performance hall built at the Winter Park school that trains students in media- and entertainment-related production work, much of it with a high-tech bent.

“It’s a wonderful marriage of art and technology,” proclaimed Full Sail president Garry Jones, praising the collaboration between the university and the Philharmonic.

Talk of marriage might be premature. The concert was more like a first date, when potential partners are sizing each other up. There are some wonderful moments of connection — along with some getting-to-know-you awkwardness — but mostly the promise of something even better in the future.

The opening segment, “Jupiter” and “Mars” from Holst’s “The Planets” was augmented by computer-animated video of stars, asteroids and something I first thought was an X-wing fighter from “Star Wars” but turned out to be just an ordinary satellite.

Copland’s “Hoe Down” was given a lighthearted overlay with the musicians bathed in whirling lights and haze. The effect could be startling: Blue hair (not of the senior-citizen variety) and orange skin (not of the Hollywood fake-tan variety). I found myself wondering if the players felt like rock stars.

And maybe that’s a problem: That the visual stimulation can focus your mind on something other than the music or, more to the point, the emotion of the music. The most jarring aspect of the visuals occurred when they worked against the emotion found in the Phil’s playing.

While the Philharmonic performed Beethoven’s Symphony No. 6 (“Pastorale”), images of Orlando flashed on a screen — but the emotion of the image was often at odds with the music. While the strings lithely hopped and skipped about, we saw a static photo of a Casselberry water tower. A dramatically loud chord was mismatched with a quiet closeup of fence. 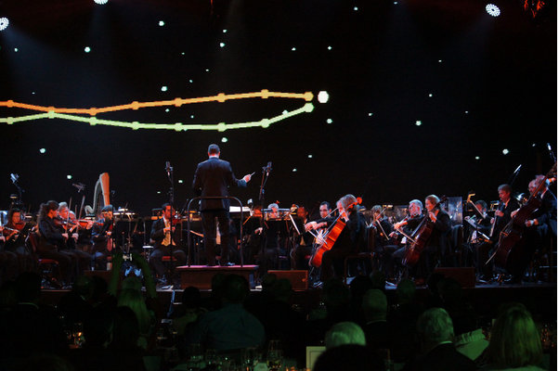 And a beautiful virtual opera set, created with lights, imagery and a scrim, perfectly complemented soprano Janette Zilioli as her voice soared through the “Queen of the Night” aria from Mozart’s “Magic Flute.” The orchestra faded into the distance as Zilioli floated in the clouds.

A classic Norman Rockwell painting was digitally ripped apart and displayed anew as Stella Sung’s “Peace Corps” movement of her “Rockwell Reflections” played. A powerful combination, beautiful in its simplicity.

David Schillhammer, the executive director of the Philharmonic, acknowledged that the gee-whiz visuals are off-putting to some patrons.
“Some purists and traditionalists find it offensive, distracting from the music — the real reason we exist,” he noted in the evening’s program.